Welcome to the gay social network, find mates and dates. 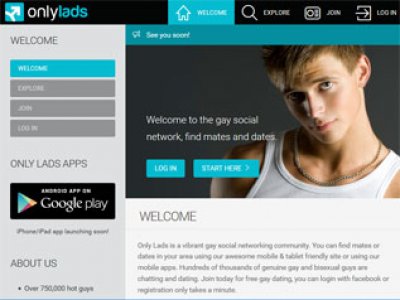 OnlyLads.com is a gay dating site for gay and bisexual UK men. It is probably one of the biggest free dating sites aimed at LGBT men in the United Kingdom. With around 750,000 members, the site claims to be completely "gay owned and operated".

The site doesn’t just focus on dating: it can also be seen as a social network and is also great for guys who just want to make new friends.

Before You Login to OnlyLads

Before we decided to login, our impression of OnlyLads was that it was well-designed, clean-cut and relatively classy without being too prude. We didn’t even have to sign up to take a look at the members. Clicking ‘explore’ allowed us to have a look at guys around the world. Overall, it is a rather transparent site.

Although it took a while in the making, the OnlyLads app is now finally up and running. The app is unfortunately only available for those with Android tablets and phones. Operating in a similar manner to Grindr, the OnlyLads app looks very much like the desktop version of the website making it quite easy to use.

Features are probably where OnlyLads is its most lacking. There are simply a couple of essentials available. What is nice, though, is that they were free and easy to use. They included:

While the layout was nice, we found OnlyLads to be sorely lacking in features beyond communication. As well as that, there were significantly lower numbers of guys even in some large urban areas. We mostly got the impression that people signed up, created an account and then left after a while.